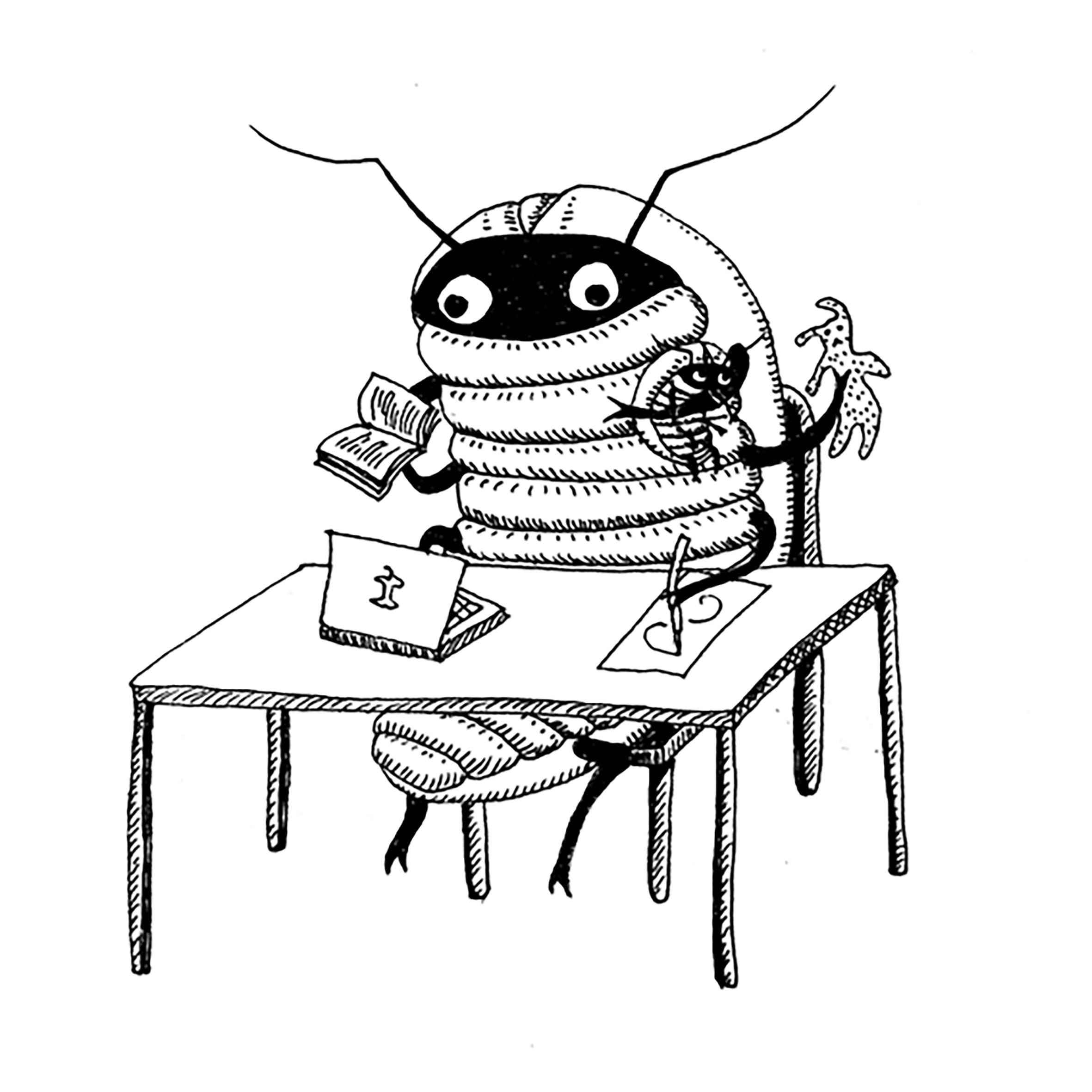 Self portrait as an insect. Gabrielle Brace Stevenson, pen drawing, 2020.

Illustration Talks About Itself: Flipping the Traditional Dissertation Dynamic and Applying Practice to Theory

Illustration speaks without words: it is non-verbal yet communicative. Historically under-theorised, the practice of illustration seems to elucidate every topic except itself. In addition, theory has long been used as a post-production ‘reflection’ on artworks and, as such, theory situates itself as the mouthpiece for such voiceless practices.

However, the dissertation alternatives now available to many BA (hons) Illustration students quietly disrupts this usual relationship. These practice-based research projects situate theory as a framework, a tool, or even fuel for ideas rather than the much more well-established use of theory to create a separate, detached, written exegesis on practice. Flipping the usual dynamic of practice and theory allows theory to become generative of practice. It is also a way of positioning the two in a more open-ended, dialogic relationship, where the ‘“outcomes” of artistic research are necessarily unpredictable” (Barret 2007: 3). Rather than looking at our own or others’ art and then applying theory to it, we might wonder: what big theoretical ideas do we want to explore through practice? How might illustration be uniquely suited to doing this? And what does this tell us about Illustration itself?

Drawing (literally and figuratively) on Michel De Certeau’s writing about the theoretical relevance of narrativity, Michael Polanyi’s ideas concerning tacit and explicit knowledge, and Estelle Barret and Barbara Bolt’s work in creating a corpus of practice as research, I will discuss how the relationship between practice and theory evolves when we use illustration to talk about illustration. The presentation itself will exemplify this method, so that I can practice what I preach as a lecturer. My own illustrations will provide the foundational rhetoric of the presentation so that '…the theory of practices takes precisely the form of a way of narrating them' (De Certeau 1984: 80).

Gabrielle Brace Stevenson BA(hons) MA is an illustrator, writer and lecturer in Critical Studies. She has written numerous presentations, articles and essays on the topic of visual culture, specialising in Illustration.

Her published academic writing incudes an illustrated essay titled ‘Faking the Physical’ about the use of ‘analogue’ and digital texture in the Journal of Illustration vol. 6., drawing primarily on the writing of Mark Fisher and Jean Baudrillard; and a chapter titled ‘Exploring Multiple Selves’ on the fragmentation of identity in Simon Hanselmann’s Megg & Mogg series in Book Practices and Textual Itineraries, Vol. 9, which brings together Mikhail Bakhtin’s theories about polyphonic texts and Samuel Butler’s ideas about personal identity.

Gabrielle has lectured on applying theory to illustration and, sometimes, illustration to theory at the University of Gloucestershire, Cardiff Metropolitan University and, currently, Hereford College of Arts.