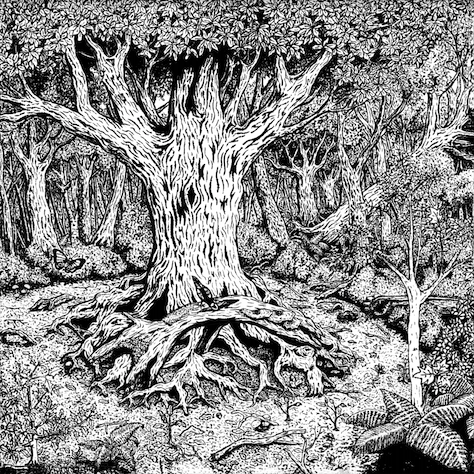 ‘Oak’ (it was drawn for XR’s online campaign series ‘Act Now’, bringing attention to issues that we are facing and which we can act upon even during Covid times)

The news is brought to us in many ways from traditional newspapers, radio and television programmes to modern online platforms such as Twitter, Instagram and podcasts. With an increasingly fast paced and time conscious audience, the uptake of news via these new forms offer illustration an opportunity to go back to it’s journalistic roots in the 19th century and express news visually for the new age.

Looking towards horizontal activist groups such as Occupy and Extinction Rebellion, illustrators would set up local affinity groups. These will create a space to come together, create work that addresses issues locally, nationally or internationally that can be fact checked within their group and then fed into a larger platform. By pooling social media power and different skillsets, illustrators will be able to create a powerful news platform fit for the 21st Century.

This will allow illustrators to disseminate ideas on a single, bespoke and egalitarian platform. Illustration affords the audience to read news in a non linear, non verbal manner. By creating a platform that engages with the pace of the 21st century, illustrators can challenge how we see news, who produces it and in what way it is read.

I am an illustrator, artist and activist based in south east London. My work explores the intersection between environmentalism, conservation and social justice by questioning what we value and challenging how contemporary perceptions destroys wildlife while not benefiting people.

My work is inspired by the landscapes I grew up in around the border of London and the Green Belt. Utilising drawing and walking, I have begun investigating what it looks like, who has access to it and what it could be. This has lead me to walk around London’s border creating a 30m story map, site specific installations in woods, fictional nature trails in Croydon and currently creating walking maps to highlight the lack of access to nature in Bromley.

In creating this work, I realise how vital it is for illustration to create a space where local issues are given a voice. For this reason I make work that creates a space for people to engage in. By utilising site specific illustrations, workshops and intricate drawings I bring the viewer into the world that I see, I hope to bring attention to the value of nature in and around the city.